Got a hankering for something spicy?  I love adding heat to what I eat with chili peppers  – whether ground cayenne pepper, sliced jalapenos, roasted serranos or poblanos, as well as hot chili paste like sriracha.  When you put these all together the Scoville Scale alarm goes off!  (The Scoville Scale was invented by a man named Wilbur Scoville – it measures the “piquance” or spicy heat of chili peppers.)   What gives chili peppers heat?  Chili peppers contain compounds called capsaicinoids (capsaicin – for short), which fires up the heat on your tongue and mucus membranes (think nose burn) – some would like to believe your metabolism, too (but, not so much). 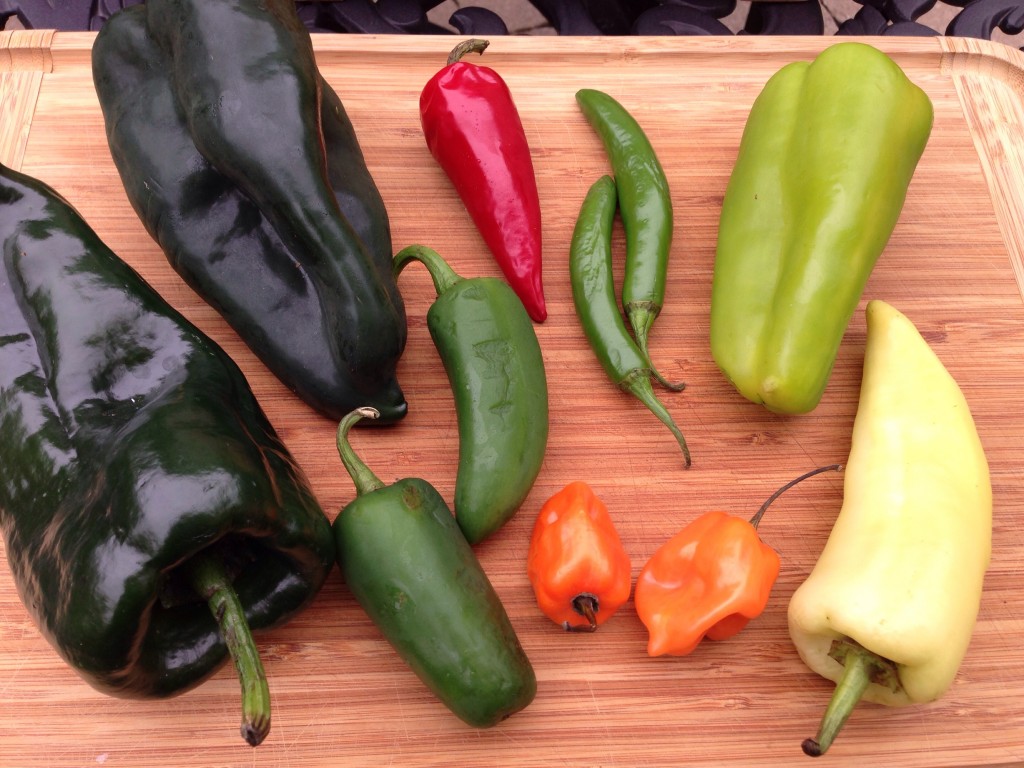 As you can see chili peppers come in an abundance of sizes, shapes and colors. (Don’t be fooled by the tiny orange habanero – they pack a lot of heat and register quite high on the Scoville Scale).  According to The Chili Pepper Institute at New Mexico State University, pepper plants use capsaicinoids as a survival mechanism to deter fruit-eating mammals – including humans, from eating them.  Caution: hot peppers can burn going down and cause damage to your mouth, esophagus and lining of your stomach – so feel free to reduce the heat by removing the seeds and the white membrane (or pith) – that’s where the majority of the capsaicinoids are, prior to cooking or eating these zippy peppers.

Let’s get cooking with chili peppers.  I thought I’d zip up a French classic: Ratatouille.  Traditionally, made with heat-free bell peppers – I am am going to impart some firey character into this dish with roasted poblanos. (Roasting them dulls the heat slightly, too.)

Since the first step is to roast the poblano pepper, here’s a simple way:

1) Cut the top off of the pepper and remove the seeds and white membrane (shown below).  For more heat, leave the membrane intact.  The seeds are not fun to chew, so I usually remove them.

2) Place the seedless pepper over an open flame on the stove top or grill.  Keep an eye on it and rotate as the flesh chars to a brownish black color.   Once the whole pepper is charred, remove from heat.

3) Immediately place the pepper in a paper bag to “sweat”.  The skin will soften and the burnt layer will separate a bit.

4) Remove from the bag and using a pairing knife remove the charred flesh by rubbing the knife gently over the surface.  Once the charred skin is removed, put on a cutting board and dice. 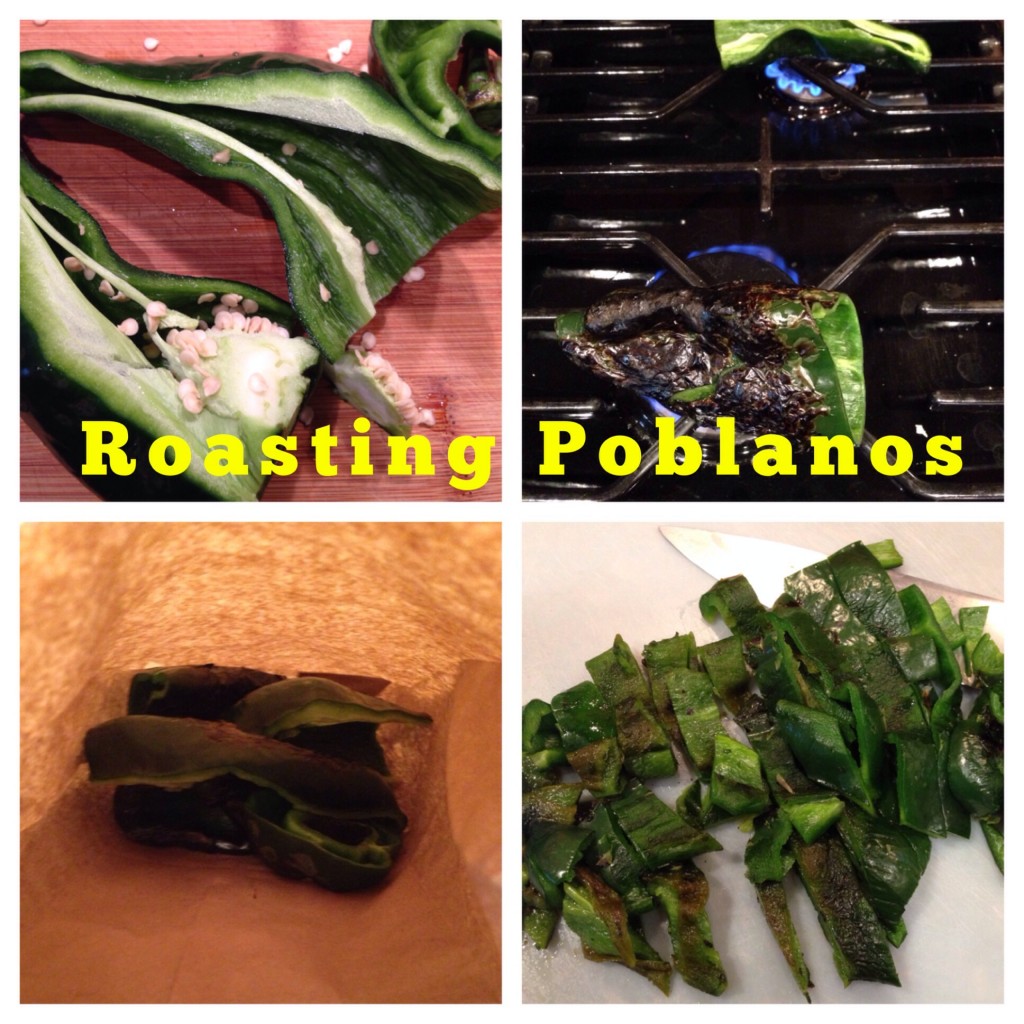 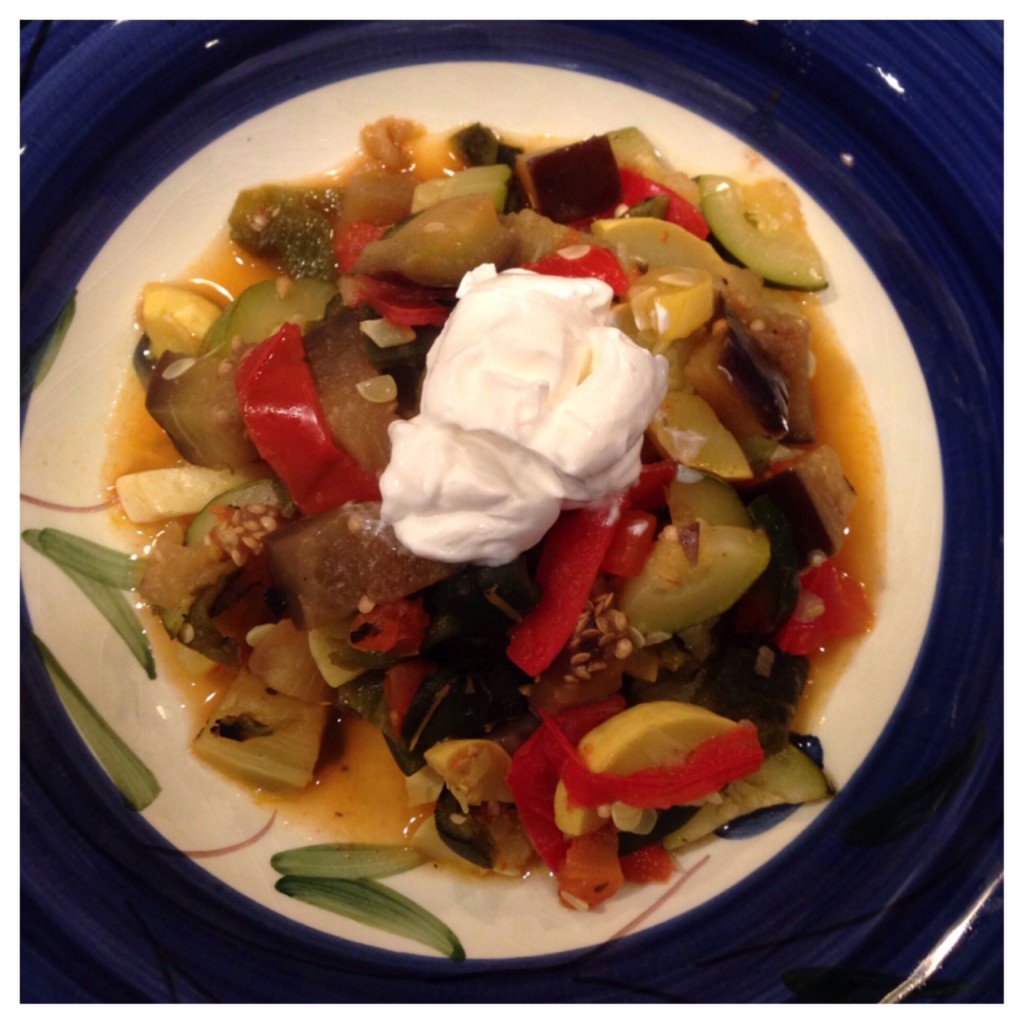 A dash of salt

Once you’ve roasted your poblano peppers (as described above), add the olive oil to a medium saucepan over medium heat, toss in the shallots and cook until translucent – about 5 minutes.

Add peppers, tomatoes, zucchini, yellow squash, eggplant and salt.  Stir all together until well combined.  Cover and let cook for 10 minutes.  The vegetables will steam in their own juices.  Stir and allow to cook until all vegetable are tender, but not too mushy.

Dollop with a small spoonful of kefir cheese or plain Greek yogurt to cut the spice and add a rich mouthfeel.

Serve by itself with a hearty whole grain crusty bread or add it to scrambled eggs or tofu, into wraps and pita pockets or atop of grilled fish, chicken breast or pork chops.