I am thrilled to kick off the fifth annual, Dreamfield’s #Pastapalooza, a food blog event that runs from today through mid-August.  I am competing in the first of five “Market Basket” challenges to help fight hunger along with other bloggers nation-wide.  We are posting unique pasta creations and competing for a chance to win $1,000 monetary donation to give to a local food bank/pantry of our choice.  My designated food bank is the Greater Chicago Food Depository.  {Disclosure: This post is sponsored by #Dreamfields Pasta; I am compensated for my time, however, all recipes and opinions are my own.}

Vote here for your favorite recipe this week — and you, too, can win!  A randomly-selected voter for this week’s challenge will win a Dreamfield’s Pasta family pack + $1,000 donation to their local food bank/pantry.  You can cast one vote a day – for 7 votes total this week – and up your chances to win!

My challenge is the Garden-Fresh Basket, which contains Corn + Cucumbers + Tomatoes + Herb (Dill) + Greens (Baby Spinach).  I can add two more ingredients per the official rules.  My original thought was to add plain yogurt and garlic – however, I swapped the garlic for Dijon mustard as it adds more robust flavor! 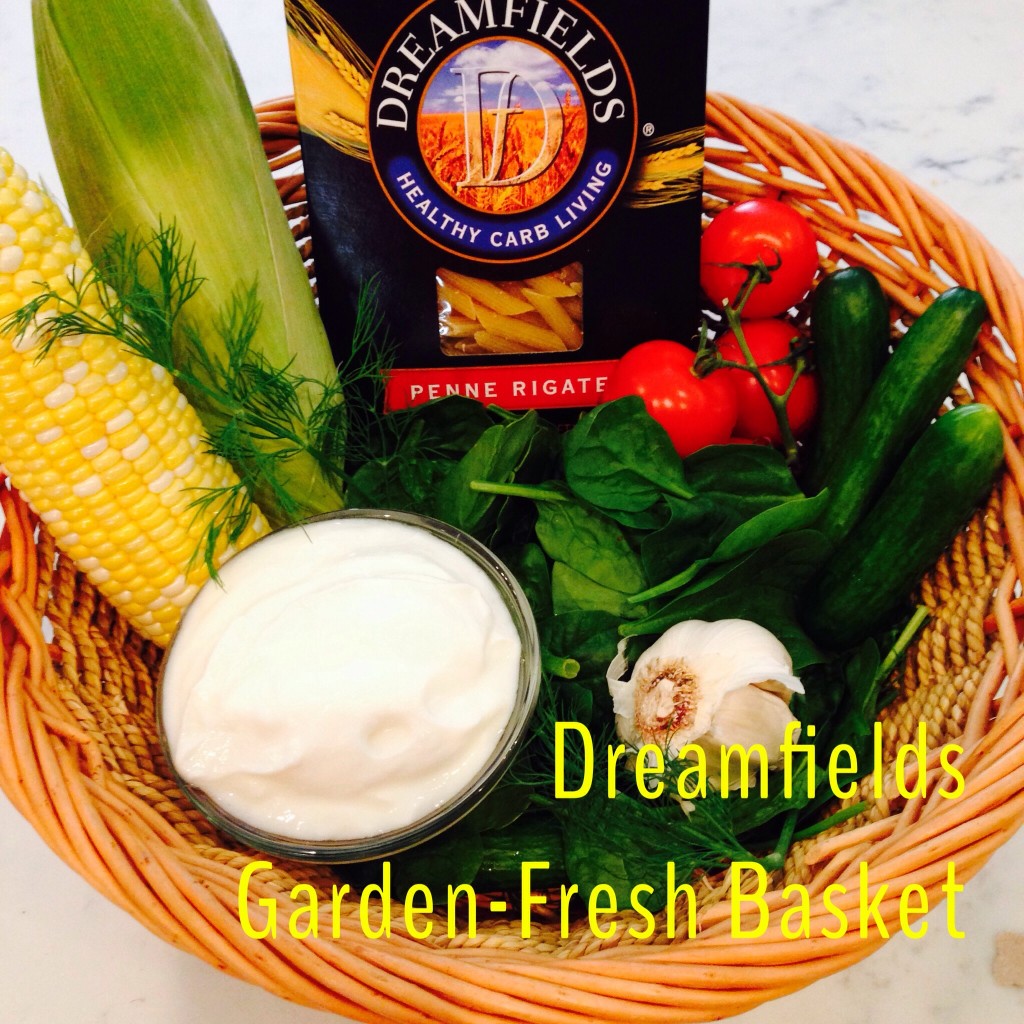 I am relishing the fact that I can use all of these fresh veggies and herbs in my recipe.  For my herb, I chose dill as it’s super aromatic (aka it has a clean, fresh scent) and it imparts such a delicate, spring-like essence in many dishes.  Plus, dill is medicinal as it’s shown to relieve a number of ailments like insomnia, gas, constipation and it has a decent amount of calcium (100 mg per tablespoon), which makes it a great herb for maintaining healthy bones.  With cucumbers in my assigned market basket, I thought of using dill as with these two ingredients in the same vicinity I think of tzatziki, the yogurt-cucumber-dill sauce. 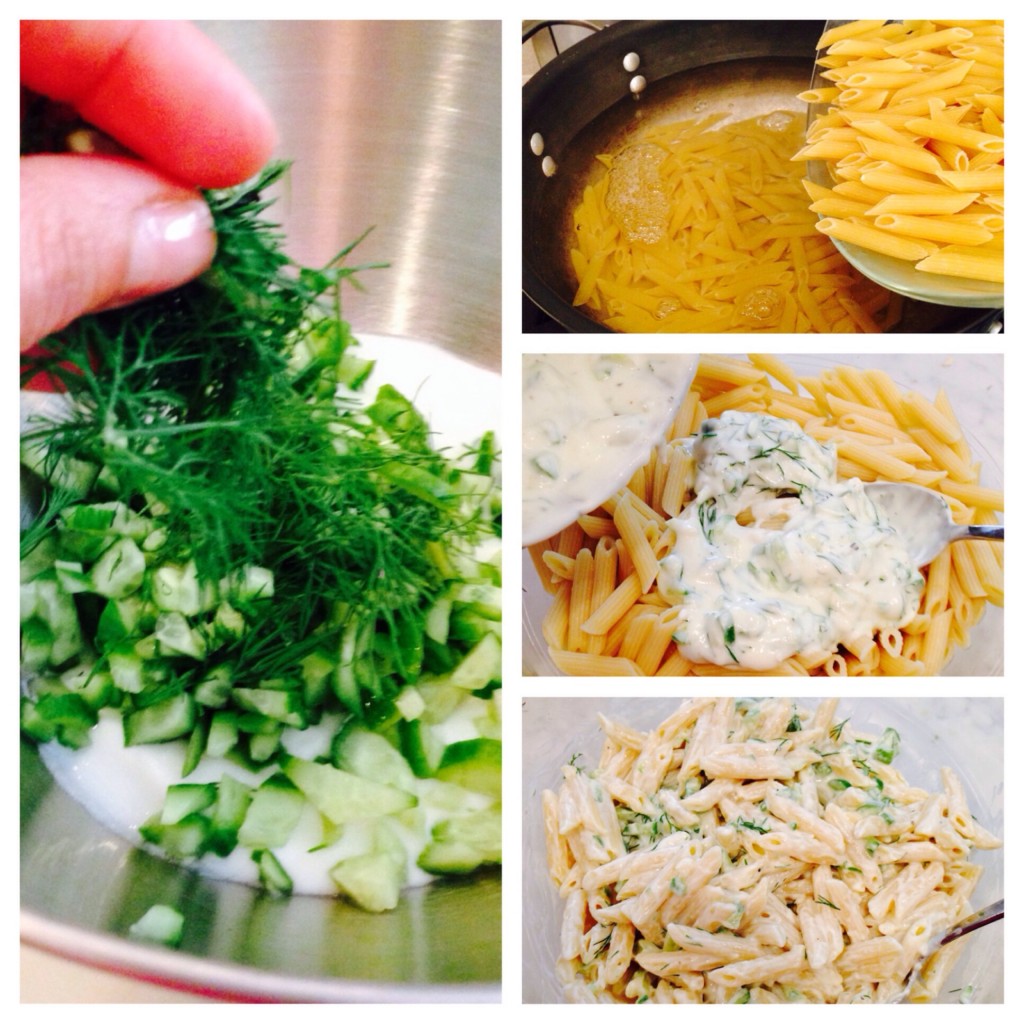 For the other elements of this dish — it’s super simple to cook up some corn on the cob and strip the kernels away from the cob.  It takes a little practice and you may have kernels fly around a bit, but once you’ve done it, it’s a snap.   Just plunge the cobs in boiling water, turn off the heat, cover and let sit for 10 minutes.  Rinse them under cold water to stop cooking process and take a cob and hold it upright securely on the countertop and gently glide a sharp knife downward stripping the kernels away.  It’s that easy! 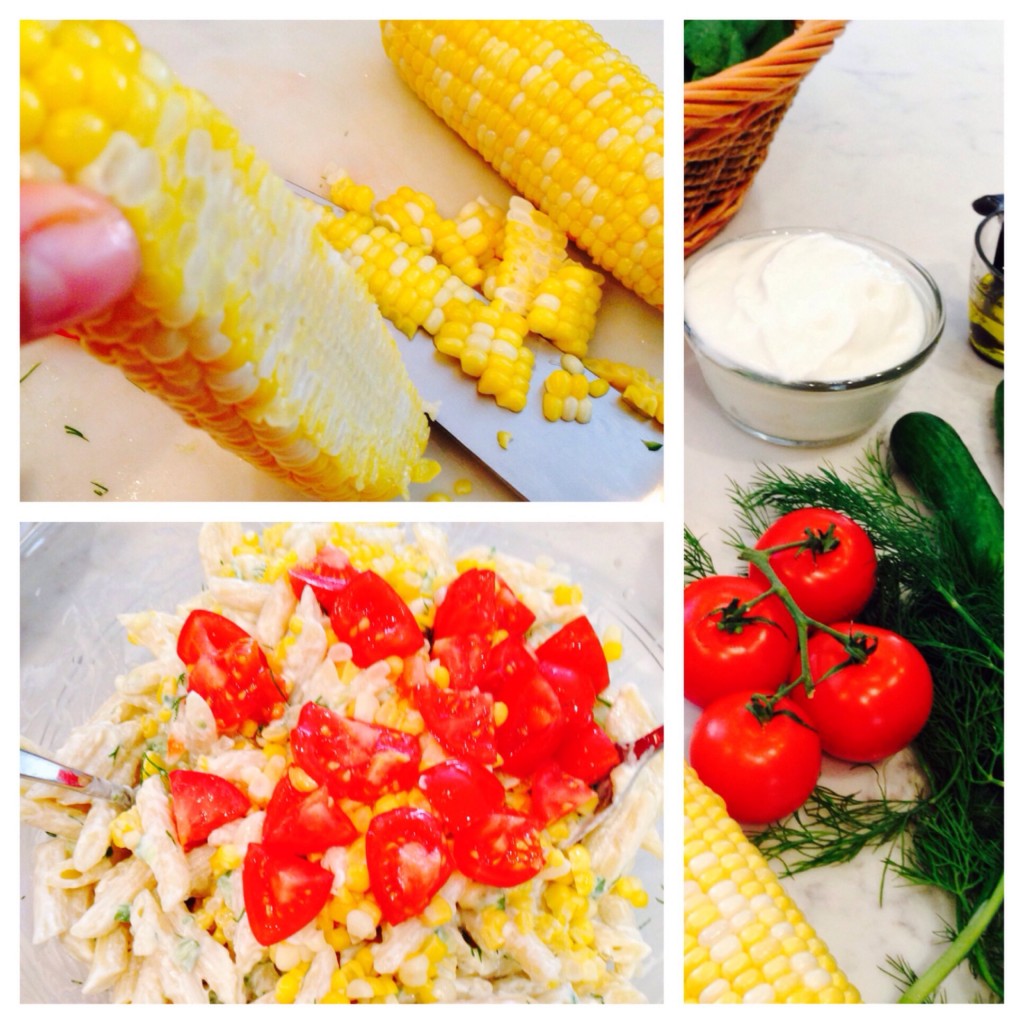 Just chop tomatoes into bite-size pieces and toss them with corn kernels into the dressed pasta.  There you have it…a pasta salad that is high in fiber, protein-packed, tasty and best of all, it’s simple to make!  Vote for your favorite Dreamfield’s Garden-Fresh Basket recipe today. 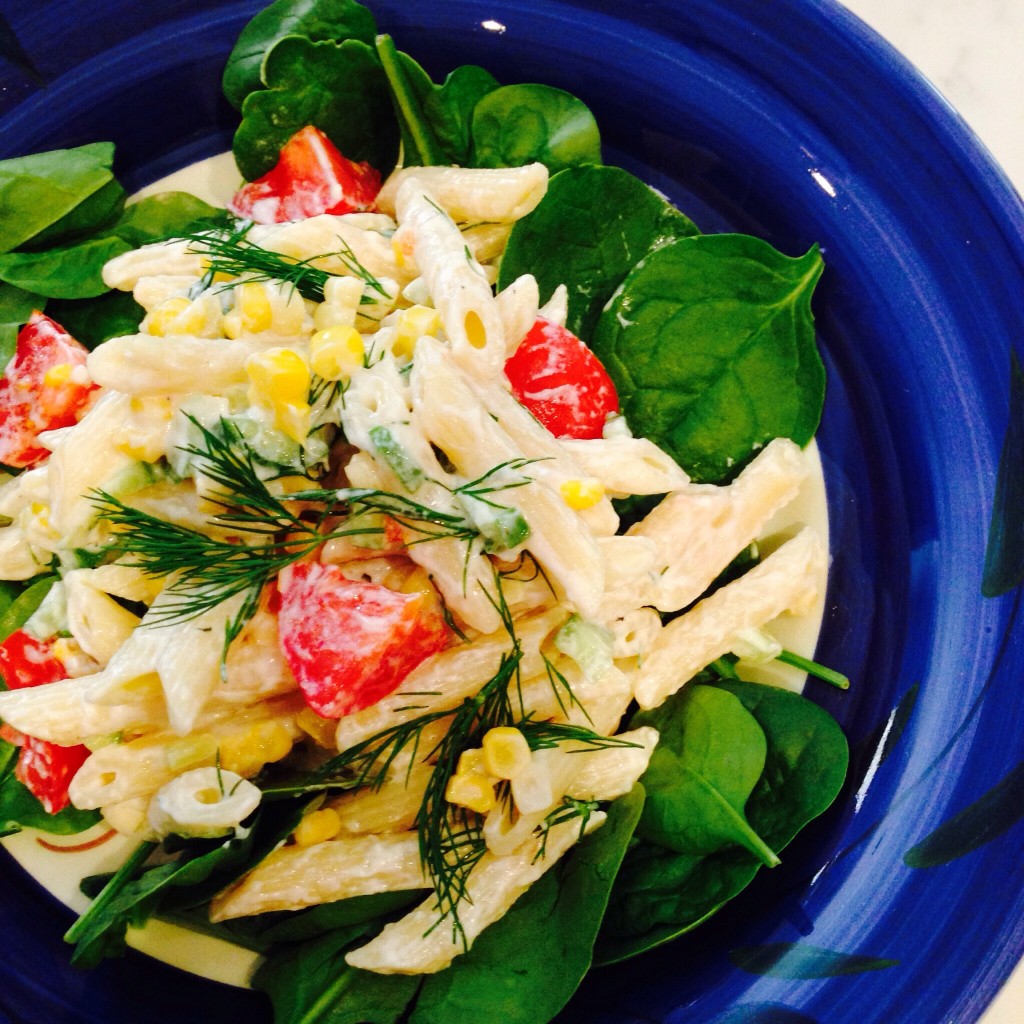 Cook pasta according to package directions.  Place pasta in a large bowl.

Meanwhile, place ears of corn into a pot of boiling water; turn off the heat and cover for 10 minutes.   Cool corn and remove from the cob with a chef’s knife.  If using frozen corn, microwave 1 minute to defrost.

P.S. – Don’t forget to cast your vote today for your favorite Garden-Fresh Pasta recipe!  Thank you for sharing via social media via #Pastapalooza and/or #HealthyPasta, too.

These gray days have me craving comfort food. 🥘

It’s hard to believe we are half-way through Jan